Tradition from the Outside

The first indication that the Qurban festival has arrived in Northwest China is the pooling of sheep outside every block of Uyghur tenements in the cities of Xinjiang. Quivering clumps of fat-tailed sheep are tied to branches and hung from trees as men begin sharpening knives for ritual slaughter.  If you can’t afford a whole sheep yourself, or you can’t be bothered with butchering it yourself, makeshift slaughterhouses at the entrance to public parks will sell you a bulging sack full of mutton to take home and roast like an American with a Butterball turkey on Thanksgiving. 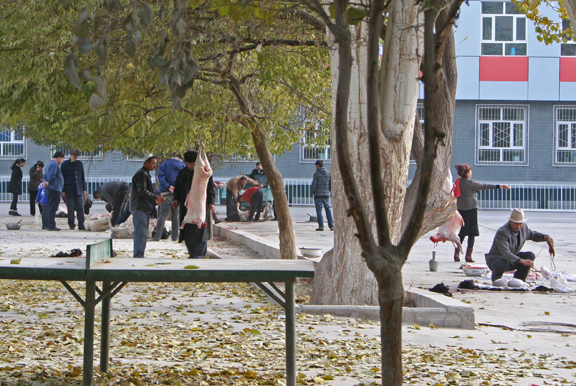 This Qurban or Eid al-Adha, the Islamic holiday which commemorates Ibrahim’s willingness to sacrifice his son through the sacrifice of a ram,  my wife and I, students at Xinjiang University in Urumqi, decided to take a road trip to see how Qurban is celebrated in Uyghur-majority parts of the region. We were in search of those unnamed places where Islamic tradition still functions as the engine of social life. We headed southeast across the desert eventually arriving at the ancient oasis town Niya in the shadow of the Kunlun Mountains which form the Northernmost range of the Himalayan Plateau.

We went to Niya because it’s the closest town to the shrine or mazar of Imam Jafar Sadiq, 90 kilometers into the vast sands of the Taklamakan desert. As Auriel Stein observed in 1901, the tomb at the shrine likely dates from the 16th or 17th century and therefore is not that of the famous Imam Jafar Sadiq, who died in 765 and is known be buried in Medina, nor is it likely to be the resting place of one of the legendary Imams who perished in the struggle to convert the Turkic inhabitants the region to Islam around the tenth century. Stein posits, however, that the site was probably a sacred place long before the accompanying mosque and madrassa were built. In 1901 this mazar was already known as a famous pilgrimage-place throughout Turkestan. And it still is today. 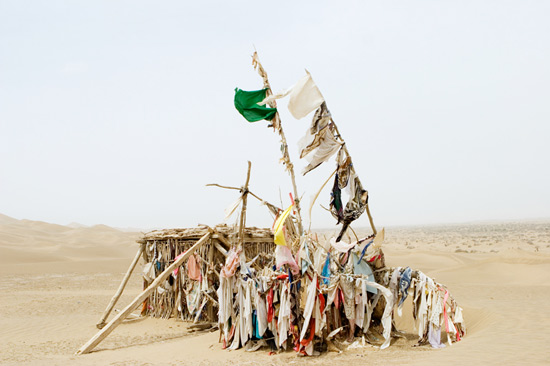 The shrine is down an unsigned road north of Paidishaim, a dusty town of 500 Uyghur inhabitants. There is a red and white gate blocking this road which requires 50 yuan from every outsider, Muslim or not, in order to turn the key. After all this was arranged, we were met at the front of the shrine by an imam who clasped my hand in both of his and quietly wished that peace be visited upon me. He was a tall dignified man with a wiry black beard and a long finely tailored blue coat favored by the Uyghur devout. He showed us the mosque and ruined madrassa and then we walked the dusty path up the sand dune festooned with votive offerings such as multicolored flags, animal skins, skulls and decorative wooden structures. As we walked down this pilgrim path the mullah fingered a string of prayer beads and greeted elderly men barefoot but for thin sandals and ancient women lost in reverie. We greeted a couple of men who had just slaughtered a large black chicken up the hill at the tomb.

It was Friday the day we arrived and based on the number of ruined buildings, it seemed that the shrine had been more of a religious center in times past. This worship day there was only a motley crew of old men riding in on donkey carts and a handful of pilgrims from the outside. The imam turned toward the great shrine at the top of the sand dune and whispered a prayer, his hands cupping his face, then he ushered us back to the front gate — our tour was over. Later while lounging on raised platforms outside the town’s general store with a group of Uyghur men, eating sunflower seeds, while they smoked tobacco and interrogated us as best they could, a mustached man of 33 named Umitjan told me that during the late summer and autumn thousands of Uyghur Muslims visit this place and this is what sustains their economy.

Uyghur shrines at the end of long unmarked paths, are real places imbued with memory and desire. As the photographer Lisa Ross has written, “There are no names telling you who is buried where. There are branches, scarves and mud bricks.” While in the modern world naming, segmenting,  and identifying is an essential part of our ontology, when we are confronted by places whose orgins are unclear, places not constructed for the tourist gaze, not open to outside social science. We are forced to create a new language “that translates the sacred nature of these fragile objects into an experience of intimacy much like a portrait of a lover strives to capture an emotion that cannot be seen.”

“After the days spent in [the] lonely woodland [along the river north of the modern town of Niya], the collection at the Mazar of mosques, madrasahs, and houses for Shaikhs and pilgrims, humble as the structures are, looked impressive. It attests the popularity of the saint, whose supposed tomb occupies the top of a prominent ridge to the west of the settlement. A group of small lakes divides the latter from the hill, which rises to a height of about 170 feet.  On ascending it, I was much struck by various signs of the pilgrims’ devotion, and of the care taken to foster it. The fine old trees at the foot of the ridge, and the large number of rough wooden arches passed by the path winding to the top, are hung  with the largest and most motley collection of votive offerings I ever saw in India or Turkestan. The variety of materials represented among the rags originating from the     widely distant parts of Asia and Europe which make up the mass of these ex-votos, would make this exhibition of textile fabrics a most instructive archaeological find if it were safely     buried beneath the desert sand and excavated after long centuries. Little heaps of earth  arranged like graves, and covering the slopes of the hill in thousands, symbolize the resting-places of the Shahids who are supposed to have fallen here with Imam Ja’far Sadiq, their holy leader, in his last fight against the infidels of Chia-u-Mackin”. 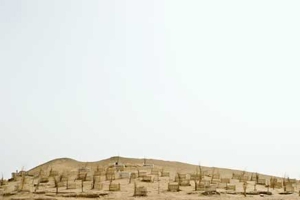 The historicity of those who are buried in this place is far less important than then the way the place is appreciated as the tomb of the saints, the last sacred space in Xinjiang. Like the finest of Robert Rauschenberg “Combines,” but without a single artist or signifier, these collections produce a unique aesethetic ambience which carries a unique resistance to the larger political and commercial world. Writing about social organs, Deleuze and Guattari note in Anti-Oedipus that the “essential thing is to mark and be marked” through a collective investment which “plugs desire into the socius and assembles social production and desiring-production into a whole on the earth” (1983: 142). Lost in the desert at the end of an unmarked road, this shrine, a marked assemblage of carefully selected artifacts, still produces desire.

The towns and cities of Xinjiang are booming, taking on the character of 1950s America — a time which Joan Didion characterized as “a peculiar and visionary time, those years after World War II to which the Malls and Towns and even Dales stand as climate-controlled monuments [. . .] The frontier had been reinvented, and its shape was the subdivision, the new free land on which all the settlers could recast their lives tabula rasa” (Didion 1979: 180–1). This is the phase China is entering everywhere. The phase which Vladimir Nabokov characterized in his great novel of America, Lolita, when travelers “came to know – nous connûmes, to use a Flaubertian intonation – the stone cottages under enormous Chateaubriandesque trees, the brick unit, the adobe unit, the stucco court, on what the Tour Book of the Automobile Association describes as ‘shaded’ or ‘spacious’ or ‘landscaped’ grounds” (Nabokov 1995: 145–6). Replacing places that can serve as lasting scenes of experience and memory through the proliferation of the generic and homogenous spaces or, “‘non-places’, to use Marc Augé’s (1995) phrase – which prioritise cost and function over look and feel” (in Ian Buchanan’s “Practical Deleuzism and Postmodern Space” Deleuze and the Social, 2006: 135)  affects the value we place on unbranded places which still reappear year after year as sacred places off the Modern map of scenic spots and systematized religions and on the fringe of modern politics and economies.

Without the trans-desert highway built by Chinese construction workers hired by the Chinese state in 1995 we would have had to take a 40 day camel journey to reach this shrine. Now daily caravans of high-speed sleeper buses sweep by this shrine every day on their way to the jade Mecca of Hotan. Yet despite this access to convenience, for outside visitors like myself, afraid of visiting every place and still not really seeing anything, while at the same time fearing that unnamed unknowable cultural centers are at best uncomfortable and worst unsafe, the shrine still strangely effects the outsider with an uneasy sense of a time when the landscape itself was sacred and life was made to serve this whole.

Sitting on a supa platform outside of the shrine surrounded by the preternaturally-aged faces of Uyghur men and women eager to teach us their language and values, yet reluctant to express interest in our differences, I was struck by the similarities and disjunctions I see between these Uyghurs in the hinterland and the Uyghurs who live in my apartment block in Urumqi. Here they are guarding the shrine against the ontology of the outside, against accusations of superstition and ignorance, while in the cities they are interested in preventing the loss of the traditions of their old courtyard neighborhoods. There they tie their sacrificial sheep to electric generators and eat more mutton than usual on Qurban, here they slaughter goats by the hundred and save or sell every part, because it is the last goats the shrine will provide for them for a long time.

As we  headed back to our standard motel room and flat screen TV back in Niya, I watched the keepers of the shrine load 104 sheep and goat skins onto the back of our truck over a pile of two dozen goat heads. All the way back to town our fellow truck riders who had spent the day at the shrine argued about the effectiveness of Western medicine and plied us with week-old pieces of bread that tasted like the desert which was turning brilliant in the late afternoon sun. As we waited for our bus back to Urumqi we told an eager English-learner from Hotan where we had been. She said the shrine fills her with an indescribable feeling. “This is our Uyghur culture.” 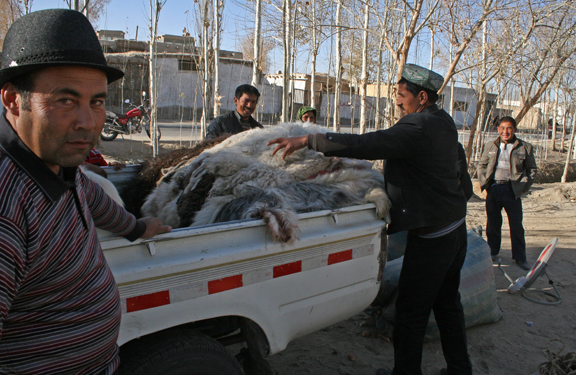