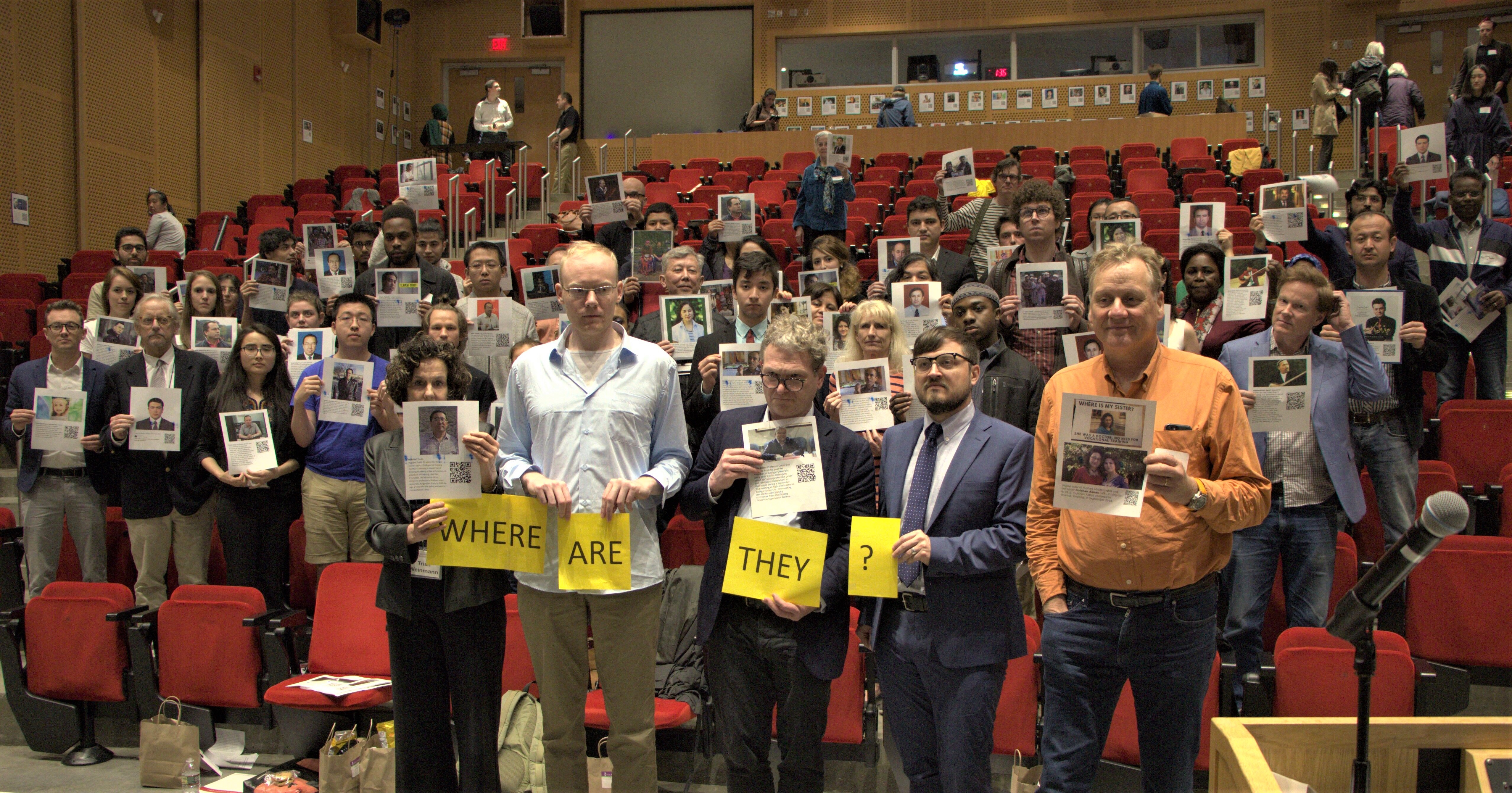 An image taken at MIT following an open discussion with students about the mass internment of Uyghurs and other Turkic Muslims on April 19, 2019.

Over the past two years I have spoken at dozens of universities and high schools about the internment of what is now an estimated 1.5 million Uyghurs and other Turkic Muslims. I talk to students about the way poor minorities all over the world are marginalized by the language of criminality and terrorism, how policing and surveillance systems disproportionately affect them. I frame this by discussing the way Islamophobia has spread around the world over the past 20 years, resulting in the invasions of Afghanistan and Iraq and, now, an attempt to “reeducate” an entire population of Muslims in northwest China.

Undergraduate and high school students in the United States are typically really engaged by this. The use of technology to monitor, profile, and control Chinese Turkic Muslim populations grabs their attention. The arbitrary ranking system that has been used to determine who should be sent to the internment camps often puts them on the edge of their chairs. Telling the stories of seeing my Uyghur friends disappear makes them sad. When I’m talking with these students, I feel like they are with me.

The students that lean hardest into my guest lectures are those from China. In every classroom, there is always at least a handful. If the talk is advertised as a Xinjiang talk, some of them come with a list of challenges to the historical narrative I and others have presented. They reiterate the sense of a Turkic Muslim threat, which has become so common in Chinese discourse. Some argue that China is an exception to international law and only Han natives of China have the authority to speak about the Uyghur “problem.” There has been some discussion of the way Chinese consulates and other Chinese nationalist groups may have been involved in organizing these types of responses.

Yet, despite this atmosphere of nationalist confrontation, after my talks many come up to me in the spirit of discussion. Many more contact me via email to ask follow-up questions and volunteer in the effort to document and translate the evidence of mass human rights violations and institutionalized Islamophobia in China.

In some instances, students are asked to write short responses to my presentation as part of their coursework. Below, I’ll share some of these responses, written by self-identifying Chinese citizens who have given me permission to share what they’ve written (provided I didn’t identify them). The common themes that emerge are shock and sadness, but also a desire to be courageous and take action.

A guest lecture at Cornell University where I discussed the mass internment of Uyghurs and other Turkic Muslims with undergraduate students.

The shock of Xinjiang

For many of the Chinese students I speak with, the Uyghurs were a group they thought they were familiar with: they knew about their food, their poverty, and the violence that is tied to them. Nearly all of the dozens I have engaged with after my talks mention that they had been told that there is “danger” in Xinjiang. Many said that up until 2018, when Xinjiang was declared “safe,” their parents had told them explicitly that they should not travel to Xinjiang.

In one response, a student wrote about having many Han friends from Xinjiang, but that until the day he met me he had heard nothing about the “unimaginable” part of Xinjiang where Turkic minorities “need to check (their) ID when passing the gates, but Han don’t (usually) need to check their ID.” Another wrote, “I didn’t even know about the camps before.” A third noted that it was “shocking” to learn that this was happening in China: “I grew up (with the idea) being instilled (in me) that fifty-six nations compose one family. This was the first time that a person showed me a social issue which was hidden by the media. Knowing the Uyghurs’ background and current situation, it is hard for me (to) believe that such unfair issues happen in a people-oriented nation, and that (this) is my country.”

A number of students noted that it was the level of detail in the evidence of the camps and security systems that made the accounts of Uyghur mass internment convincing. One wrote: “What impressed me was the list which showed the different groups that the government classified Uyghurs into, and the relevant departments supervising certain groups all the time by using advanced technology that (incorporated) face identification.” Continuing, the student noted, “No citizens are able to hide themselves from all the cameras in the city, and people behind the cameras can easily obtain personal information by locking (onto) the face that appeared on (the) computer screen.” He wrote that he knew face recognition technology was “beneficial” for social security, but had never considered that “it can also be used as a tool for monitoring people’s personal life.”

Another was surprised to learn that, in the student’s words, “Uyghurs are classified and documented based on their religious behavior, social activities, level of education, language, etc. And the government has also set up checkpoints to control their travel…What was most surprising is that once Uyghurs go to places dominated by Han, they are very likely to be pulled over…Their freedom is restricted, and they are forced to learn Chinese and even give up their religion or (at) least not practice it publicly.”

Islamophobia as a new kind of racism

Over and over, in classrooms from Massachusetts to California, Chinese students mentioned that they had never considered profiling Muslims as a kind of racialized discrimination. They talked about an example I shared about Islamophobia, which can be summarized in this illustration posted by the anti-Islamophobia website The Muslim Show.:

A student from southeast China noted: “The thing that really caught my attention was an image of comparison among killers of different races. If there is a Muslim shooter ‘1.3 billion Muslims are held responsible.’ This is unfair to people of color, especially Muslims. And it also produces a stereotype of their religion, too. And this discrimination does not only happen in the U.S. but also in China.” Another student, also from Guangdong, noted: “This is evidence that people have stereotypes of different (religions and ethnicities).”

Several Chinese international students found that comparing the ethno-racial situation in China to American racism was useful, even as they also understood that American slavery produced a different kind of violence. One wrote that it made sense to compare the racialized history of redlining and discrimination toward African and Asian Americans in Seattle to the urban cleansing processes in Ürümchi, which disproportionately forced rural-origin Uyghurs from the city and into the “open-air prisons” of rural Xinjiang. Drawing on this comparison, the student could see that when bias is institutionalized, it becomes a kind of systemic racism regardless of where it is located in the world. Continuing, the student wrote: “What I learned about the places that Dr. Byler studies is that they are very racist and corrupt.”

One of the most moving essays came from a student who noted that in her native city in China, there were not many Uyghurs. “Until today I did not know that the Chinese government put so much control over Uyghurs,” she wrote. “I know that there were several shocking Muslim related terrorism events in China in the past couples of years. Such policies do secure the Han, including me, a lot. But I was shocked to learn that the price of our security comes at the price of many innocent people suffering.”

This acknowledgment of the “price of security,” the commodity that has come to be so prized in the Xi Jinping era, is at the center of what surprised Chinese students. For many of them, social security is an unquestioned good. It is a conservative impulse that runs through much of their life. There is not much reward for questioning this imperative.

They noted that developing relationships with people who are marginalized by the drive to security comes at a heavy cost. One student wrote, “I realized that sometimes the truth is hidden in the dark, while citizens are ‘protected’ in a room where they only know what ‘supervisors’ want them to know. Learning about the truth requires courage and action.” It means overcoming what could be referred to as a Chinese version of social “fragility,” a defensive sensitivity to racial stress among privileged people. Han international students need to use the privilege they carry as well-connected Chinese citizens to push back against what is being done in their name.

A number of the students that have contacted me after hearing me speak have asked me for more resources. They want a reading list, ways of educating themselves on these issues. I typically point them to this curated list of recent articles on Xinjiang for a place to get started with their reading.

But they also want ways to get involved. One of the things they’ve noticed is a lack of reliable, evidence-based information on what is happening in Xinjiang in Chinese. In response, one of the projects I am now beginning to develop with some colleagues and student volunteers is a Chinese-language online repository for translations of key articles written about the contemporary situation in Xinjiang. Some are also working together to comb through hiring documents for Chinese kindergarten teachers in Xinjiang to get a sense of how the education system is complicit in Uyghur “re-education.” Some are investigating forced labor associated with the camps, tracking the companies involved in producing forced-labor goods. Other students are tracking statements made by international entities condemning the camps in an effort to recognize emerging solidarities and conspicuous silences.

At a recent conference at MIT, the independent scholar Gene A. Bunin noted that everyone carries skills that can be put to use in refusing to accept the “re-education” of Uyghur society. As we continue to mainstream Uyghur voices, the avenues for involvement will continue to proliferate. To move the dial on this issue, the “we” who will not remain silent must grow. It must include Han international students. We must become the many.

This article first appeared in the China news journal SupChina on May 1, 2019.