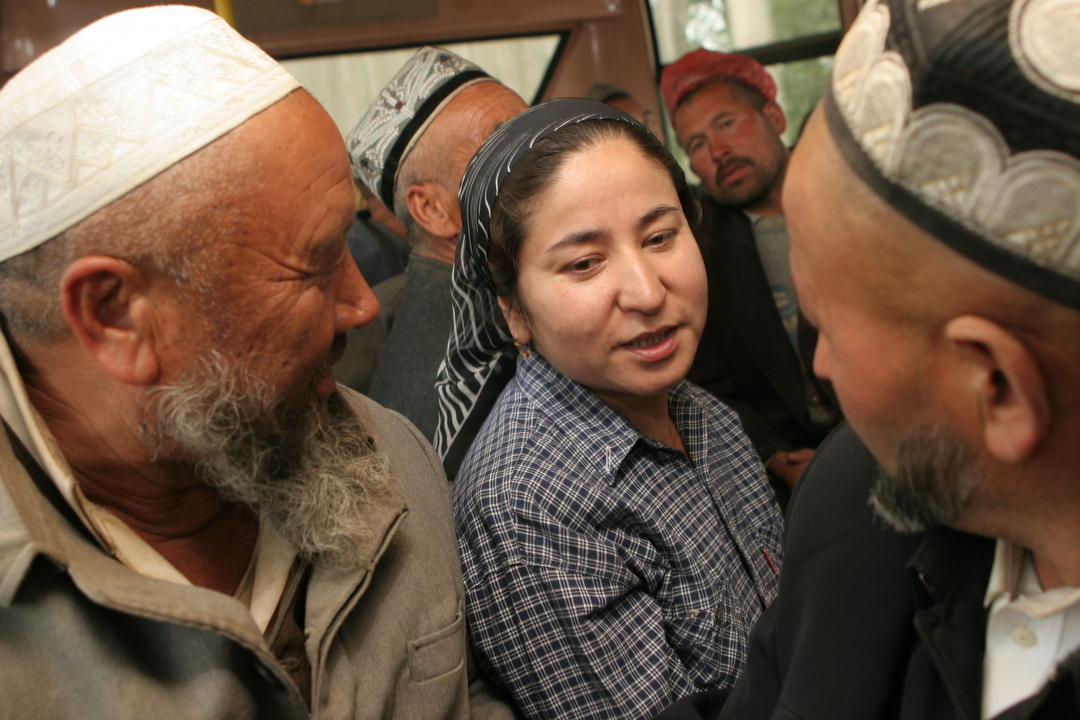 The ongoing atrocities targeting Turkic Muslim peoples in Xinjiang are, in many forms, gendered violence. As the “People’s War on Terror” campaign escalates, Han officials and settlers are removing Turkic Muslim men who they perceive as threats to “security” and “safety,” emptying out a clear path for Han settlers to insert their presence onto Uyghur and Kazakh homelands. This comes at the expense of the women who remain.

In the state-initiated “Becoming Families” campaign, Han cadres enter native peoples’ homes and scan for any signs of Islamic piety, or wield scissors to cut off women’s long dresses on the streets. Since 2017, the state has begun to attack Muslim-Han marriage taboos as well as Muslim halal practices as forms of “religious extremism.” Interethnic marriage was forced upon many Uyghur women, an approach that went even further than simply encouraging them with money and other incentives in 2014. Several female survivors from the camps recounted experiences of being forced to take unknown medication that stopped their menstrual cycles. The mass-incarceration has also led to a large population of children, whose parents were detained, being taken into orphanages, where they receive Han patriotic education instead of learning their mother tongues.

In the past year, as more overseas Uyghurs, Kazakhs, and Kyrgyz have spoken up about torture, political brainwashing, and intensive forced labor, China’s propaganda machine has begun to spin every more hysterically. State media recently released a series of sensational short films, titled Embracing a New Life, featuring Uyghur women narrating, in Mandarin Chinese, their supposedly life-changing, empowering experiences after “reeducation.” With English subtitles, these films are clearly catering to a Western audience, with the rhetoric of “saving Muslim women,” borrowed from the American “War on Terror” playbook.

But unlike the U.S. War on Terror, the videos in Xi Jinping’s People’s War on Terror use coerced confession, a tactic that traces its roots back to the Mao era and has been refined by the party over the decades. Just as the memory of the May Fourth Movement was deployed during Maoist China to retroactively laud the Chinese Communist Party for liberating women from domestic slavery, the party is now portraying itself as trying to save Uyghur and Kazakh Muslim women from the extremism of Islamic patriarchy.

Screen shot from one of the short films Embracing a New Life, featuring a Uyghur woman working at a factory as part of her reeducation, March 15 2019

In these narratives, Islam-related practices are denounced as religious extremist thought, including but not limited to wearing a veil, teaching their Sino-fied compatriots about Islamic piety and modesty, not smoking and drinking, marrying early, practicing halal, and so on. In one of the videos, a Uyghur woman is shocked and offended by gender-segregated seating norm in Muslim society, calling it a form of religious extremist thought. One of the few men interviewed confesses that he abused his wife because he was affected by religious extremism, and after reeducation he regretted it and finally understood “what love is.” Another young Uyghur woman practices yoga meditation on an Islamic prayer mat, reflecting on her confusion and loss during the time she was plagued by religious extremism.

Post-reeducation, the cinematic language suddenly brightens, as black-and-white scenes are given color and music. One woman says she’s thrilled that reeducation gave her a second life, as though she was transported “back to my innocent childhood years. I am the girl who shakes off the shackles.” Other women express gratitude to the state and condemn their prior life. One confesses, “Seeds [of extremism] had been planted, if I had gone any further, I would have been the next one to set fires and kill people.” Another says, “I felt that a huge burden had been lifted off my shoulders, I started to slowly draw myself out of that dark world.” Another one: “I have rid myself of all extremist thought and reinvented myself. I have a feeling of freedom and liberation that I’ve never experienced before.”

Speaking in terms of her historical consciousness, another states that, “We were used as tools before, if we were not saved before it was too late, I would have betrayed this great country, and have the national solidarity undermined. We would never have a stable country or happy lives. The education saved three generations of my family. They repent what they’ve done, and understand why they were wrong. We learned to tell right from wrong. We used to be blind. We didn’t really understand the law.”

The films are disturbing and should trigger more questions than answers. With victim testimonies growing online, along with China’s refusal to allow a UN delegation to investigate, it is easy to suspect that these women were not filmed of their own volition. Especially because women are culture bearers, they are particularly important targets for manipulation in China’s campaign against Uyghurs, Kazakhs, and other Turkic Muslim cultures.

The technique of showing people confessing the error of their ways is an old Chinese Communist Party (CCP) favorite. In the early 1950s, the party carried out “thought reform” (思想改造 sixiang gaizao) campaigns calling for intellectuals to engage in ideological and self-criticism, purge their bourgeoise perspectives of individualism and liberalism, and become socialist new men and women. The state also initiated rituals of “speaking bitterness” during Marriage Reform and Land Reform to gain political support from women and the underclass –– who must denounce their arranged marriages or exploitative landlords and express gratitude for the Communist Party as their saviors. In Chinese, these sessions were called “remembering the hardships from the past and reflecting on happiness in the present” (忆苦思甜 yi ku si tian).

While “giving voice to women” in the Western context is a good thing, Uyghur women interviewees are forced to not only confess ideological mistakes, but also become the state’s allies in denouncing “religious extremism.” They are, willy-nilly, recruited to take part in the killing of their own culture and language.

Post-reeducation, the women in the videos demonstrate their embrace of market values and economic development. They are reconstituted as the state’s instruments of labor with new personalities, even if it means internalizing exotic stereotypes of ethnic minority women in China — one young woman says, “I want to open a dance studio. We Uyghur people are naturally good at singing and dancing.”

All the women in the films aspire to lead lives as economically and politically productive beings, with dreams of opening a tailor shop, a dance studio, or becoming a teacher and guide in the exhibition halls of the camps, applying what they have “learned” in the camps. These scenes are crucial, as they are part of China’s attempt to justify its mass-internment camps as “vocational training schools.”

In China, Islam has become an ideological battleground between the secular state and religious Turkic Muslim groups. When development projects encounter resistance from the people, the Chinese state lets out the war cry of “strike down on religious extremism,” ultimately at the service of maintaining its power and discipline. Nowadays, factory-equipped internment camps are preparing generations of docile laborers in China’s industrial complex. Women are the first ones groomed for the task of managing their communities.

The social reengineering of women’s roles started as early as 2010, one year after several violent ethnic clashes broke out in Urumqi in July 2009. Shortly after, hundreds of Uyghurs and Kazakhs were disappeared by police. In virtually all social spaces in Xinjiang, observance of Islamic piety came under strict scrutiny.

In 2011, Xinjiang governor Zhang Chunxian and the Party Committee promoted a “Beautifying Project” campaign that focused on modernizing ethnic minority women through the industrialization of women’s handicrafts, cosmetics, and accessory products. It was an effort to realize the region’s “Leap Forward Development” (跨越式发展 kuayue shi fa zhan). One aspect of the campaign was to help rural women develop the handicraft industry; another was to “promote women’s suzhi”. Suzhi in Chinese can be roughly translated as “human quality,” measured by education, behavior, or personal refinement. Suzhi discourse has been a key component in China’s campaign of building a civilized society since the 1990s, especially in disciplining rural peasants and stirring desire in middle-class families for social upward mobility. in Xinjiang, the Beautifying Project’s underlying objective is to unveil Muslim women. Accompanied by the slogan “Let your beautiful hair flow and pretty face show” (让美丽的头发飘起来,漂亮的脸蛋露出来 rang meili de toufa piao qilai, piaoliang de liandan luchu lai), the project aimed at cultivating a sense of modernity, patriotism, and devotion to the state among Muslim women.

Street sign in Urumchi, Xinjiang (circa 2011): “Ladies, please take off your veils, and not impede modern civilized society.”

Women of various ethnic groups in Xinjiang, such as Uyghurs, Kazakhs, Mongols, Kyrgyz, Tajik, Sibe, Uzbek, Hui, and Tatar, are often reduced to a single category, “Xinjiang women” (新疆妇女 Xinjiang funu), in the Party’s propaganda, which attributes “women’s liberation” to the Communist Party. Socialist films depict women either fighting for marriage freedom against religious and communal patriarchy, e.g., Hasen and Jamila (1955) and Anarkhan (1962), or becoming a labor model and commune leaders in socialist production, e.g., Red Flower in Tianshan (1964). The stories of many became one — minority women are hardworking, they just need Han/Communist guidance to fight against their male oppressors, then they can contribute their lives to socialist revolution and production.

Of course, the women’s liberation movement in Xinjiang during the first half of the 20th century was much more complex than the CCP’s narrative. With the region’s proximity to Russia and Central Asia, and warlord Sheng Shicai’s 盛世才 pro-Soviet policies, frequent border activities during this period facilitated much economic trade, cultural communication, and development of women’s education. After the October Revolution, many young people studied in the Soviet Union, and Soviet Uyghurs propagandized Marxism in Xinjiang before Han communists.

As early as 1885, girls were allowed to attend the new schools of Muslim reformers in Artux; in the early 1910s, three Soviet Tatar women — Gulandam, Zaytuna Naman, and Reshida — pioneered women’s education; the first Women’s Day rally was held at a girls’ school in Xinjiang’s Ghulja in 1918, much earlier than the one held in Guangzhou in 1924; and so on. In other words, throughout their modern history, long before the Chinese Communist Party marched into Xinjiang, women in the area have been doing things to improve their status, tapping into a mixture of local and international forces.

There is no such thing as a monolithic “Xinjiang woman.” And they don’t need saving by any central authority. They need to have their own voices amplified.

At the end of 2017, renowned Uyghur anthropologist Rahile Dawut, founder of Folklore Research Center at Xinjiang University, was detained, and remains in detention to this day. Dawut, who inspired many students to follow her steps in documenting Uyghur native traditions and eventually returning them to the people, is being punished for being a woman role model in Uyghur society.

The list of detained women intellectuals and celebrities is long: iconic artist and performer Sanubar Tursun, Ph.D student Gulgine Taschmamat, poet Chimengul Awut, novelist and newspaper editor Halide Israyil, law professor Gulazat Tursun…and many other businesswomen who joined the market economy as early as the 1990s. But this state terror on women actually exposes the CCP’s worst fear: that it will lose legitimacy when its people realize it has broken a decades-old promise to deliver equality and autonomy.

This essay first appeared in the journal SupChina on May 14, 2019. It is reprinted here with permission.