The giant 41 meter Buddha faces directly west. It seems to embrace the new construction on the other side of Bright Red Mountain in on the Northeast periphery of Ürümchi.  Behind him the constant ring of hammers and the roar of Bingtuan Construction Engineering Company trucks rises from the still unfinished wing of the brand new Hilton hotel and the alien-looking international expo center. Every few minutes the low industrial roar is punctuated by the “dong” of a giant bell just to the left of the huge gold figure. Chants of “A-mi-tuo-fo” are carried intermittently on the breeze.

The temple complex is symmetrical. Gates and bridges; fierce gods of war; giant rock gardens made of plaster; hobbit-style caves made of grape arbors;  opposing ornate temples filled with auspicious jade from Hotan for middle-class consumers; matching rows of elephants bearing Tibetan prayer wheels line the causeway. In the center of the complex is a rotund reclining Buddha covered by dozens of naughty golden children. People place their wishes inscribed on red ribbons here. They light incense and bow in four cardinal directions praying for good fortune.

All across Northern Ürümchi, Buddhism seems to be on the rise. The small shrine at the main gate of the People’s Park now plays Buddhist songs on a constant soundtrack. The old Qing Dynasty temple in Red Mountain is festooned with red ribbons. Buddhism serves many purposes in precarious times. For young crew-cut Han men it appears to give them a sense of martial calm. Rather than wearing the large metal-banded glass-faced watches that mark off aspiring businessmen, they wear prominent strings of beads around their wrists.

In the giant Buddha complex, this type of masculine Buddhism was less dominant. Instead there were many families with young children. They seemed really happy that the Jianfu Green Town Real Estate Investment Group had created the complex by donating 300 million yuan. Perhaps the apartment towers of Green Town that dominant the near distance compliment their desires for the good life which the mega-temple helps them imagine. 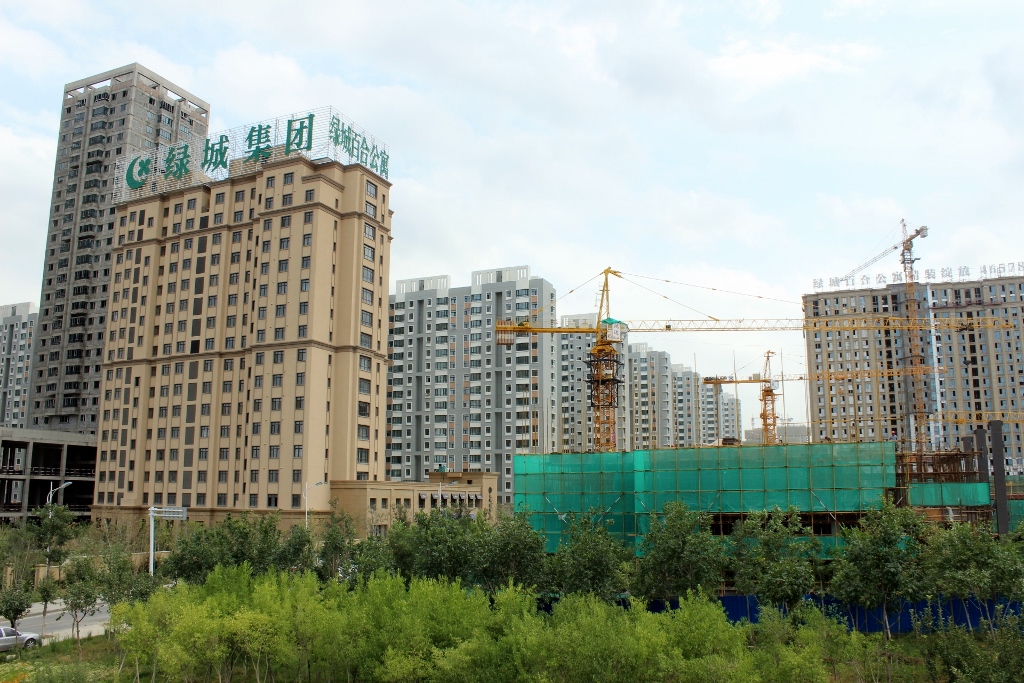 A grandma in one of these families told me that they come here occasionally. She was proud that her three-year old granddaughter was learning how to genuflect and recite the prayers. She said, “This is our history, it’s good that she is learning it.” When I asked how this space compared to other religious spaces nearby she said, “Well, the Buddha is big, it’s really the biggest one in the area.” But then she remembered there was another giant Buddha at the Heavenly Lake in the mountains outside of town. I didn’t tell her that there is an even bigger Buddha build into a rock face of the Southern Mountains near the Bingtuan city of Shihezi.

The anthropologist Sara Davis argues that giant Buddhas built by Chinese businessmen in the borderlands between Yunnan and Myanmar serve as signals to investors. They mark a space as safe and as a hub in a network of capitalist success. In Xinjiang Buddhas do the same – they lay claims to territory and they announce the priorities of the state. In a province where it is nearly impossible to build new mosques, giant Buddhas are being given pride of place in prominent public spaces. 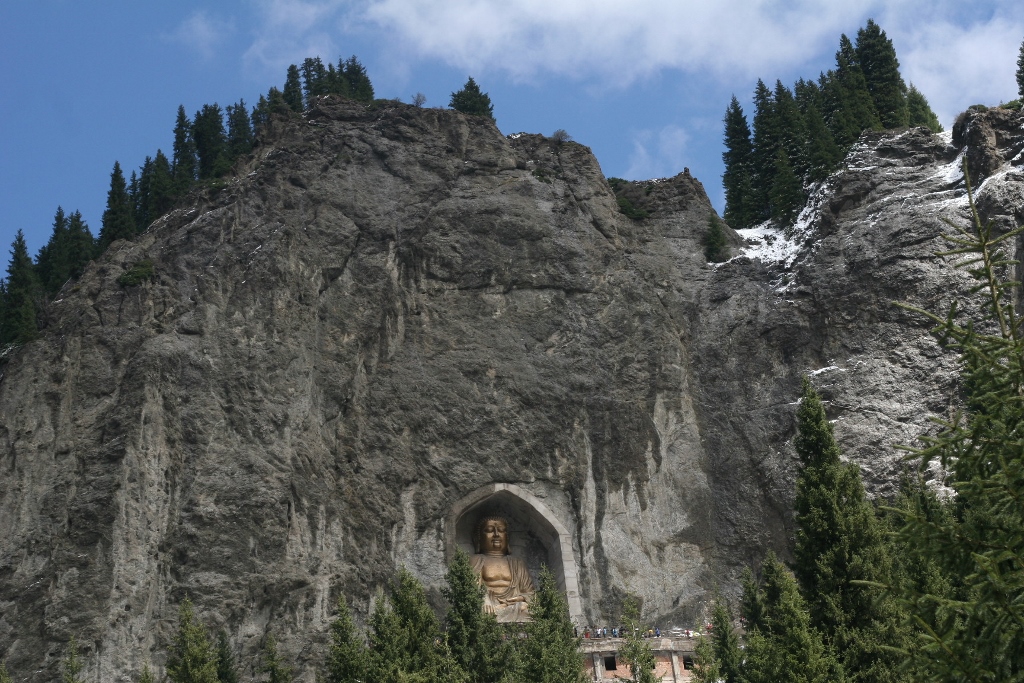 Several years ago I went to see the giant Buddha near Shihezi with some friends from Ürümchi. A Kazakh friend who was traveling with us said he felt alienated by the sight of it. It seemed to him that the alpine landscapes which he remembered from childhood visits to extended family were being transformed into a tourist destination. The way the giant Buddha was combined with the big yurt made of concrete at the base of the rock wall, made him think that an exotic “Kazakh lifestyle” was being brought into bizarre proximity with alien cultural symbols. Building garish figures out of crumbling concrete was a way of reframing indigenous ways of life.

The people I met on Bright Red Mountain didn’t seem to notice or care about the way their space was connected to global capitalism and Han sovereignty. For them it was a place that allowed them to maintain a sense of security. But maybe in the back of their minds they noticed that the big park was a Uyghur-free space. Unlike signs written in Uyghur and Chinese throughout the rest of the city, in Bright Red Mountain the signs explaining the significance of the sites was written only for a particular audience: Chinese, Japanese, Korean and English.

In a corner behind the temple to the 500 Arhats and the mural of Journey to the West, a single Uyghur security guard sat making sure that the Uyghur boys playing in the Hilton construction site didn’t jump the gate into the temple grounds. He was listening to Uyghur music on a small hand-held radio – carving out a Muslim space behind the back of the giant Buddha of the Western Region. 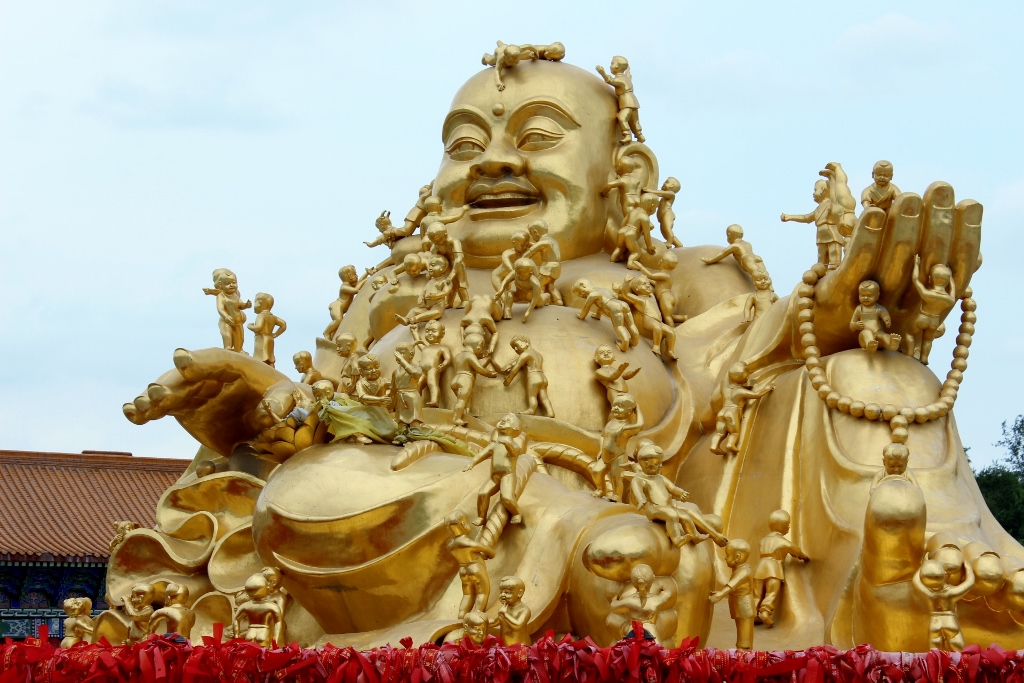 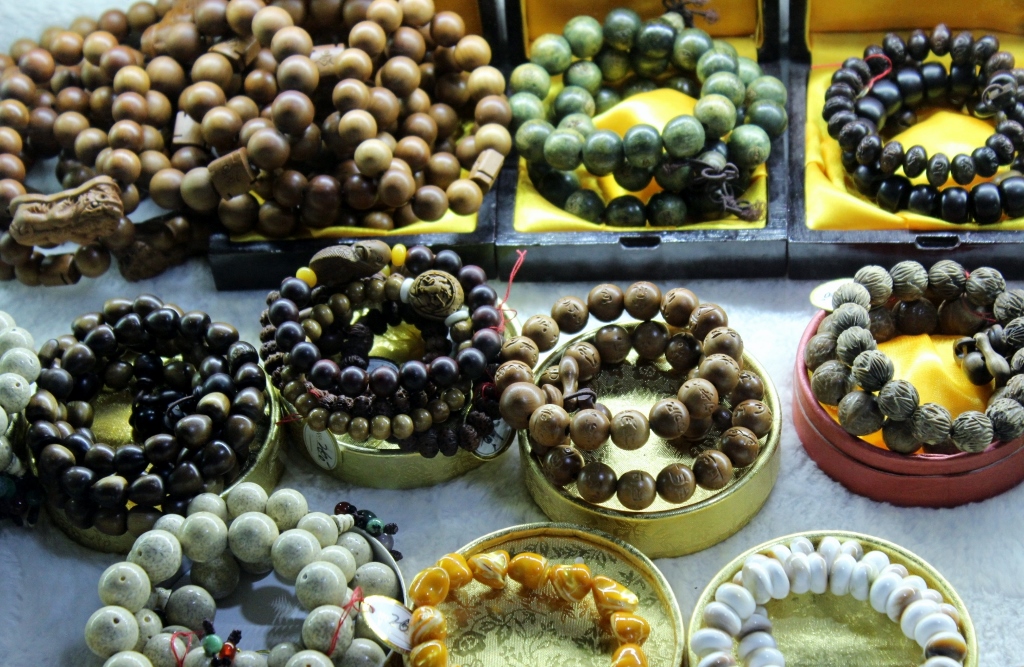