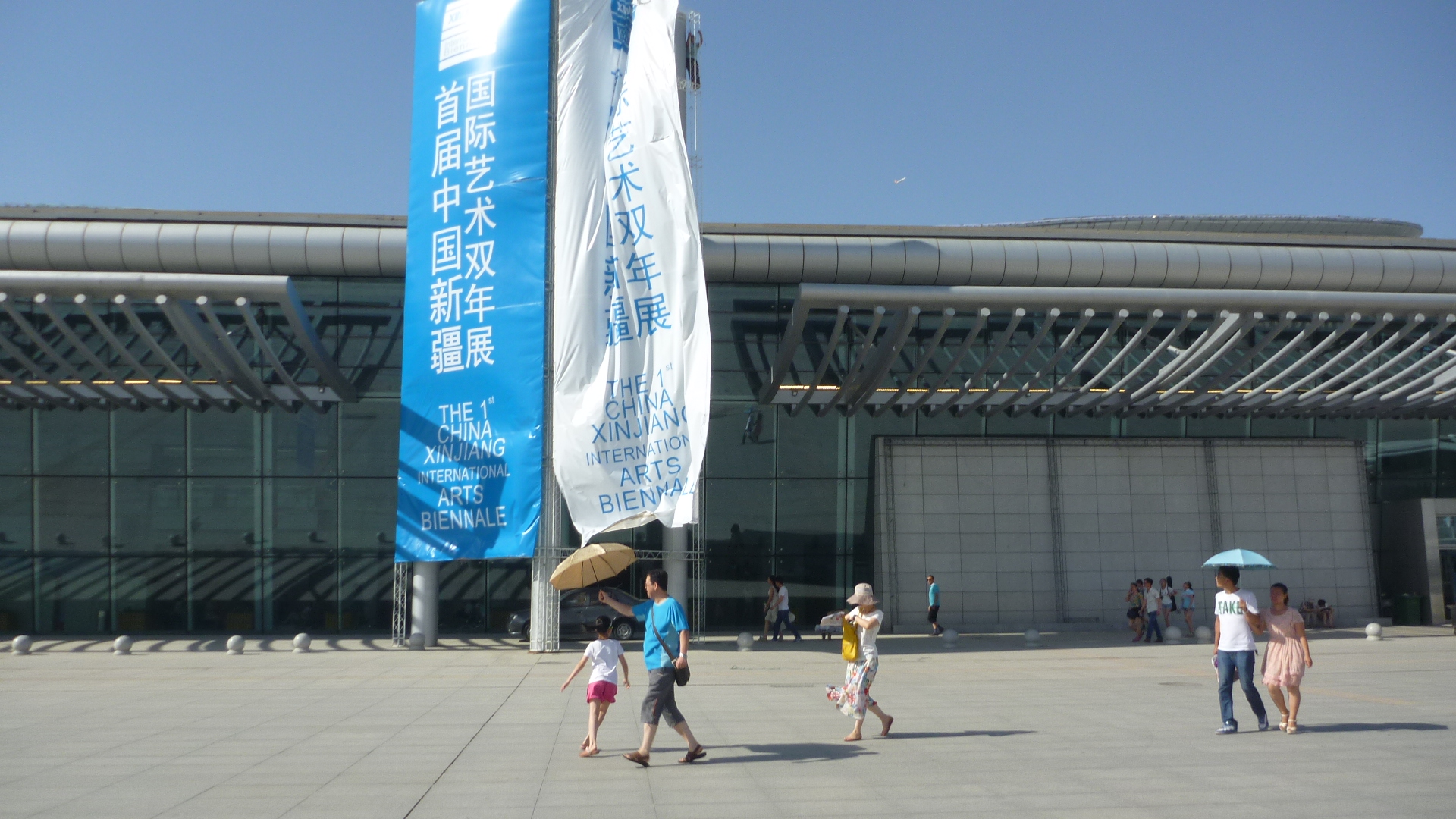 There were a lot of people at the International Expo Center on July 20, 2014, the last day of the Xinjiang Art Biennale. The massive complex next to a giant Buddha and Hilton hotel on the northeast side of the city echoed with the sounds of an original score by Philip Glass called “Encounter on the Silk Road.”

The exhibition was heavy on spectacle. Giant video screens, paintings and sculptures drew the largely Han crowd into massive spaces lit by natural light. Smartphone cameras were often raised against the intensity of actually looking at the mesmerizing objects that called the viewer to contemplate the way contemporary Xinjiang is “a land of many colors.” 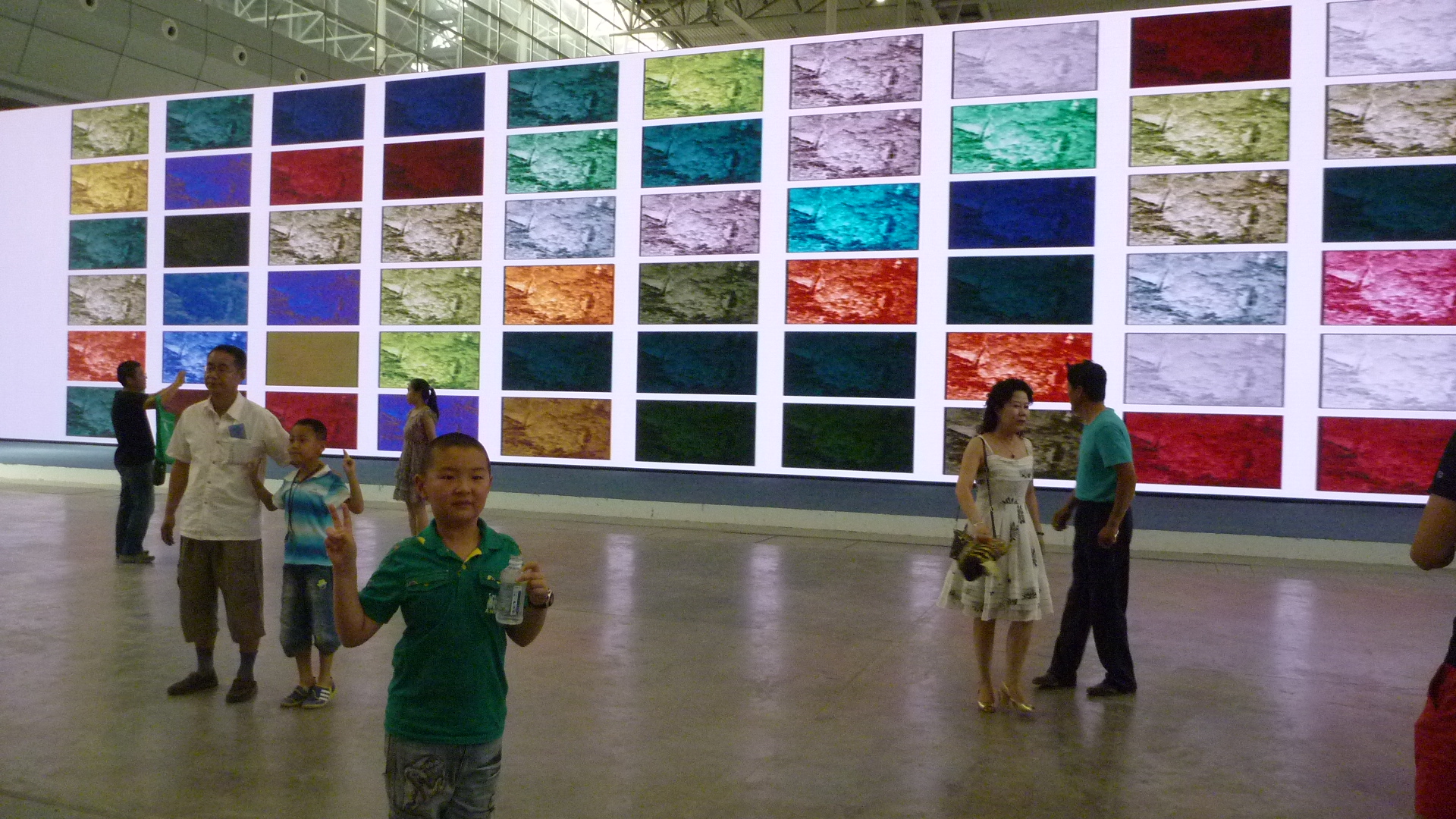 True to this theme, many of the pieces on display were both diverse and provocative. Although there was a smattering of the usual pantheon of Chinese avant garde works on display and much of the video art seemed to be from Bulgaria and Italy, many of the pieces were specific to the region. As the deputy director of the Xinjiang Ministry of Culture and head curator of the show Zhang Zikang put it, the Biennale is a big step in leading Xinjiangers to embrace art. He estimated that over 300,000 people (close to a tenth of the population of Ürümchi) would see the show over the month that it was on display. For Zhang, a former director of Beijing’s Today Art Museum, this is “extremely important” because art carries values that all humans believe in. As he told the Global Times, art “can help create understanding.”

Something on the order of twenty percent of the hundreds of pieces were paintings by minority artists. And a majority of the other works were Xinjiang specific paintings by Han artists. Although some of these paintings fell into the usual traps of representing the exotic, many of these paintings were quite sophisticated in their interpretation of local traditions and the life of urban and rural landscapes. 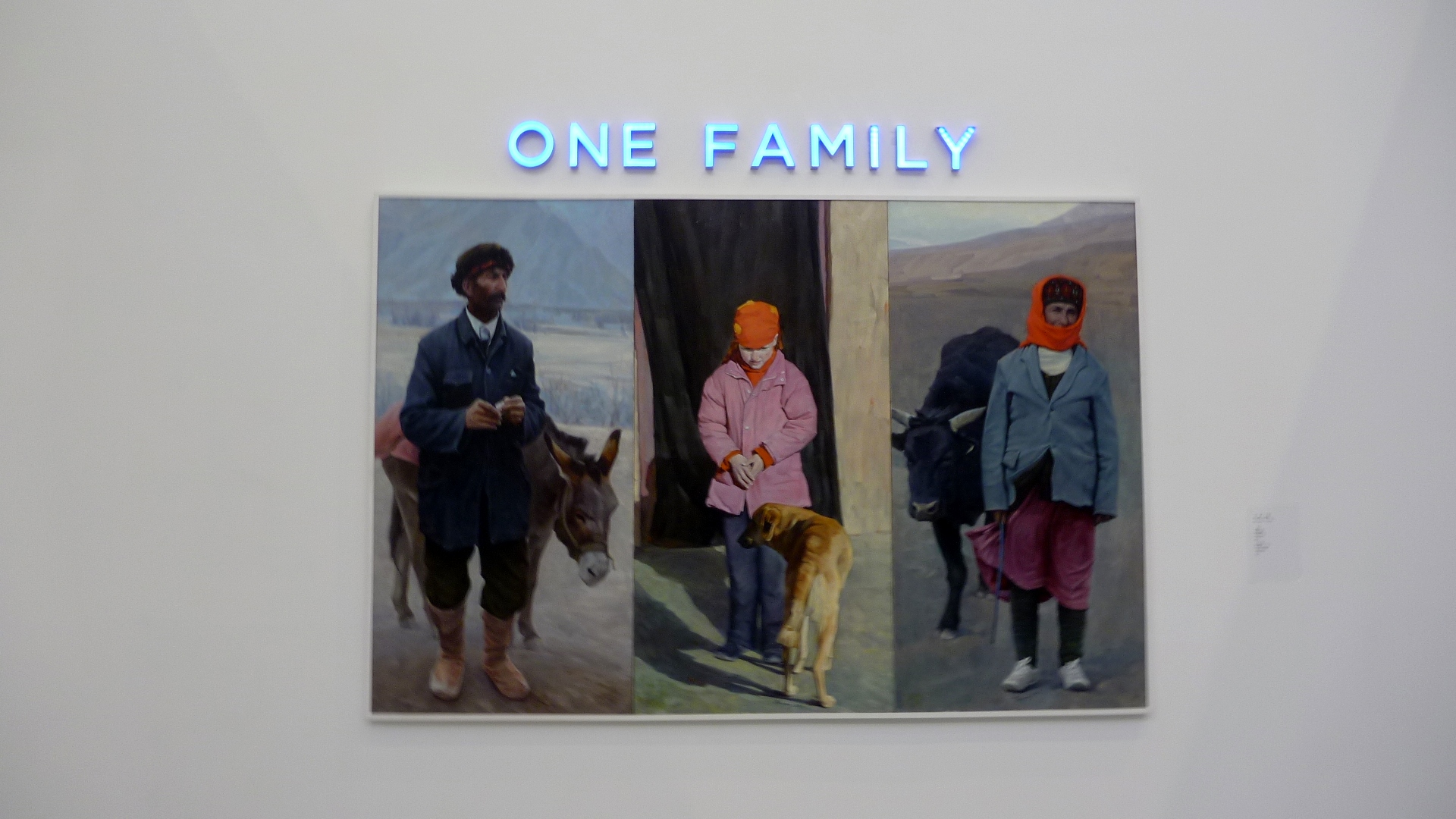 The exhibition overview asked us to consider the ways in which Xinjiang can reach out to the world with openness and innovation. And many of the viewers of the Biennale did just that. They read the painting descriptions with care, they touched the paint, caressed the sculptures, and posed as participants in the paintings. They tried to understand, but sometimes they spoke to the painters – saying stuff like “A-ni-wa-er, I see but don’t understand.”

Part of this frustration came from the way many of the paintings from minority artists like Enwer, Nurmemet Alimehman, Kamil Abdushakir, and Qurbandi focused on abstract feelings such as “noise,” “memory,” and “invisibility.” One Uyghur artist named Ali K. depicted the subtleties of life among trash by imposing paintings of animals on large scale pictures of garbage. His paintings were perplexing to some viewers who discussed it amongst themselves in the Northwest-style saying things like “Sa yisi?” or “what does it mean?” My sense is that they were not trying to frustrate the viewer as much as comment indirectly on their experience of contemporary life. 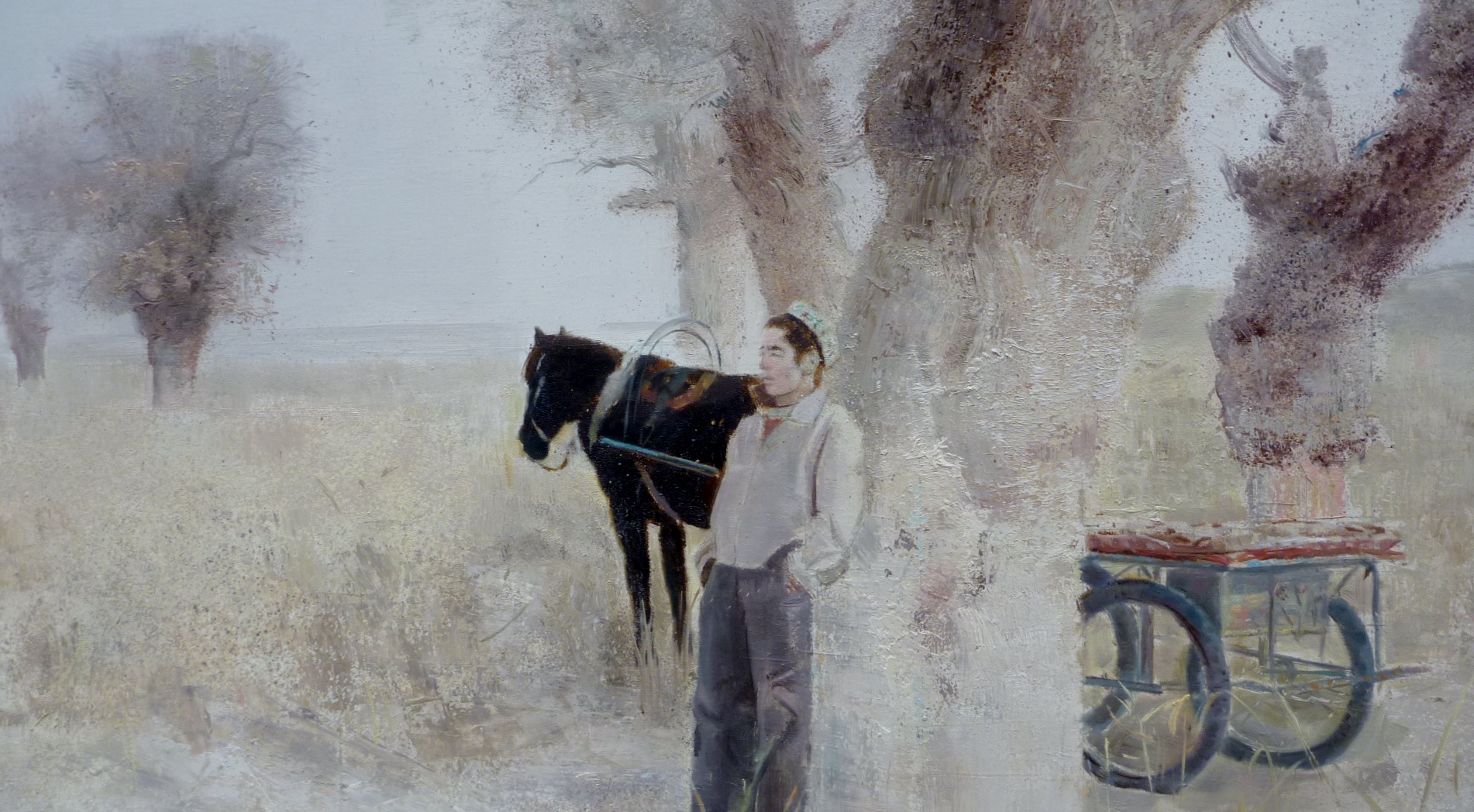 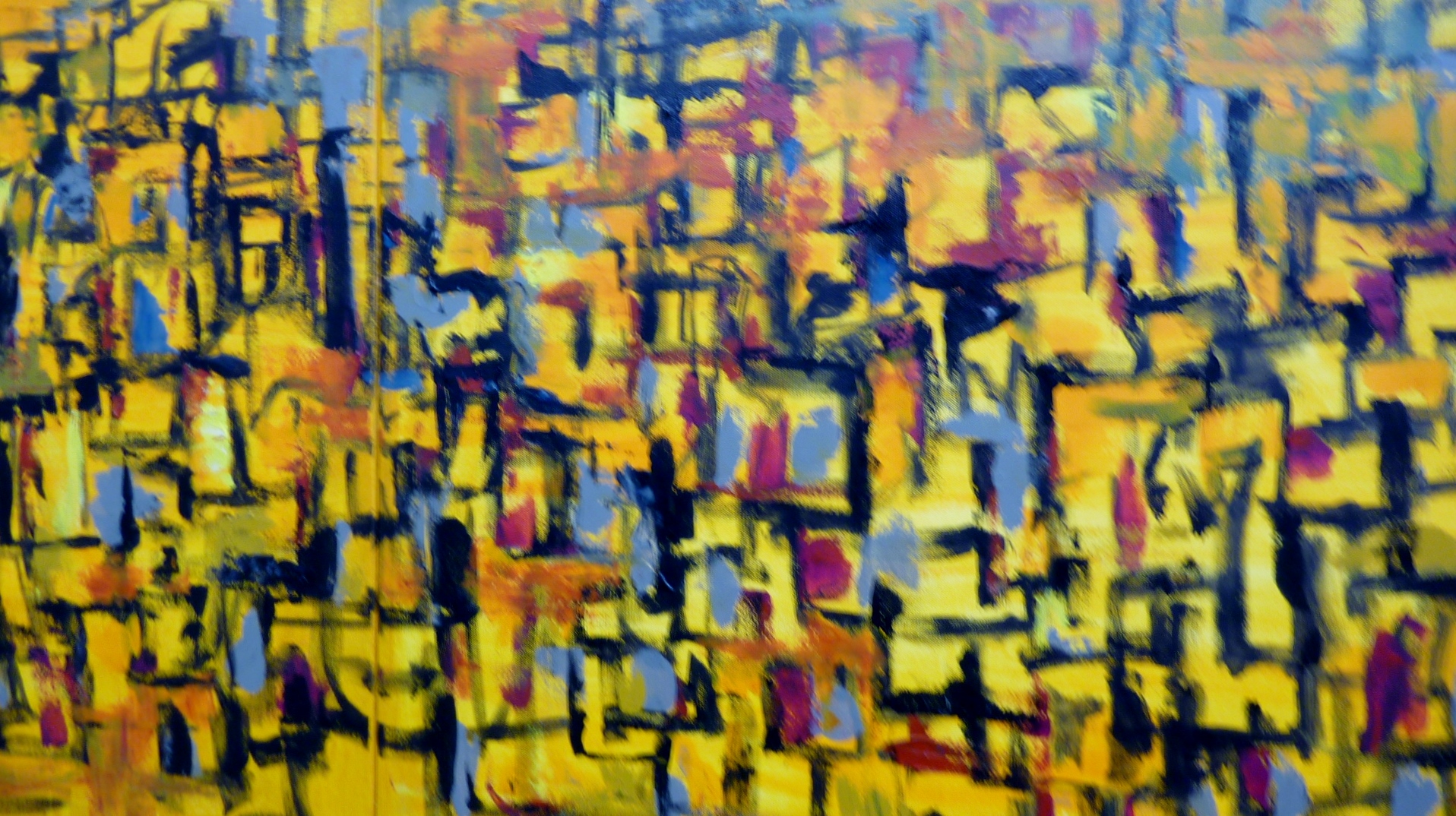 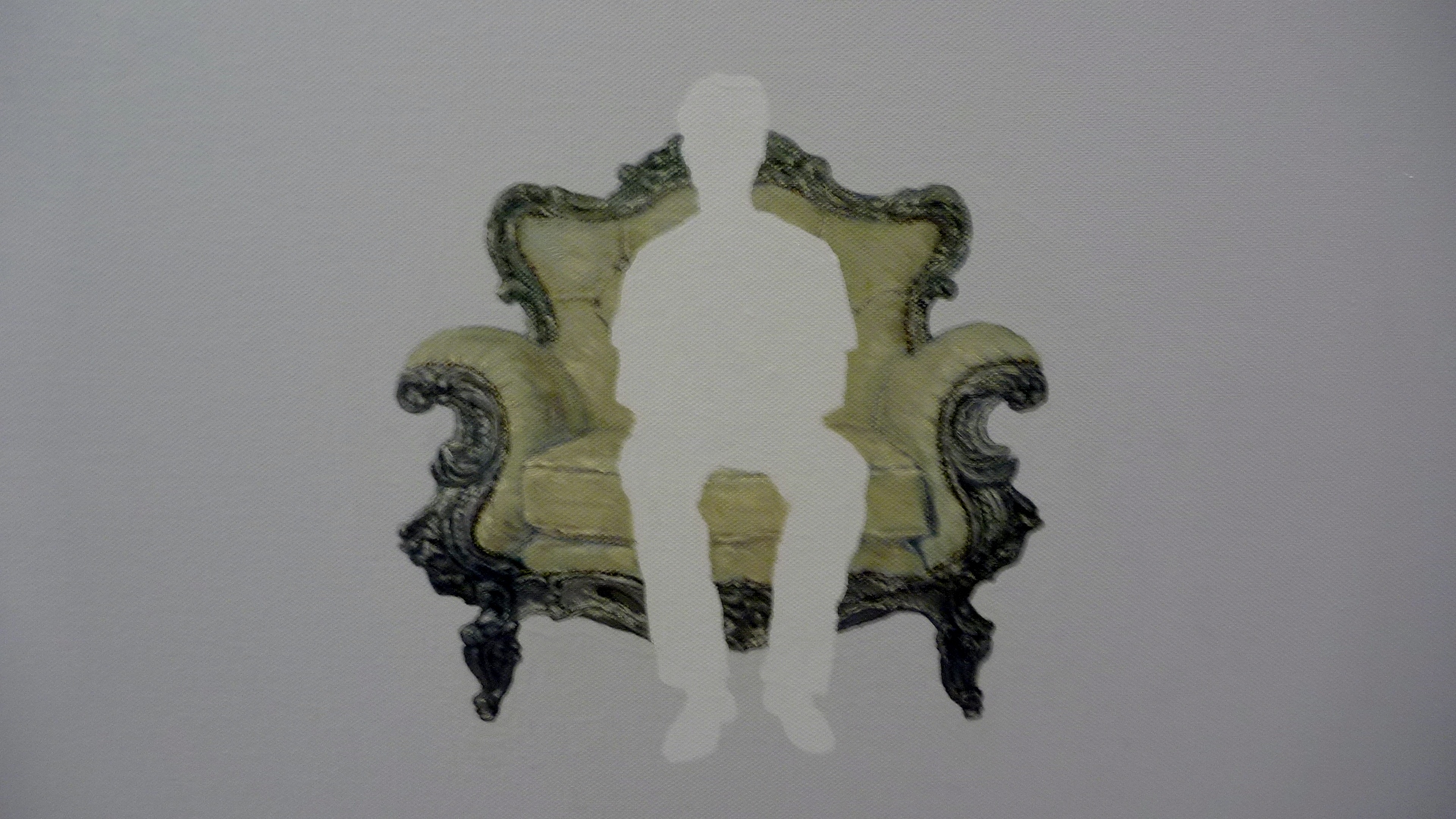 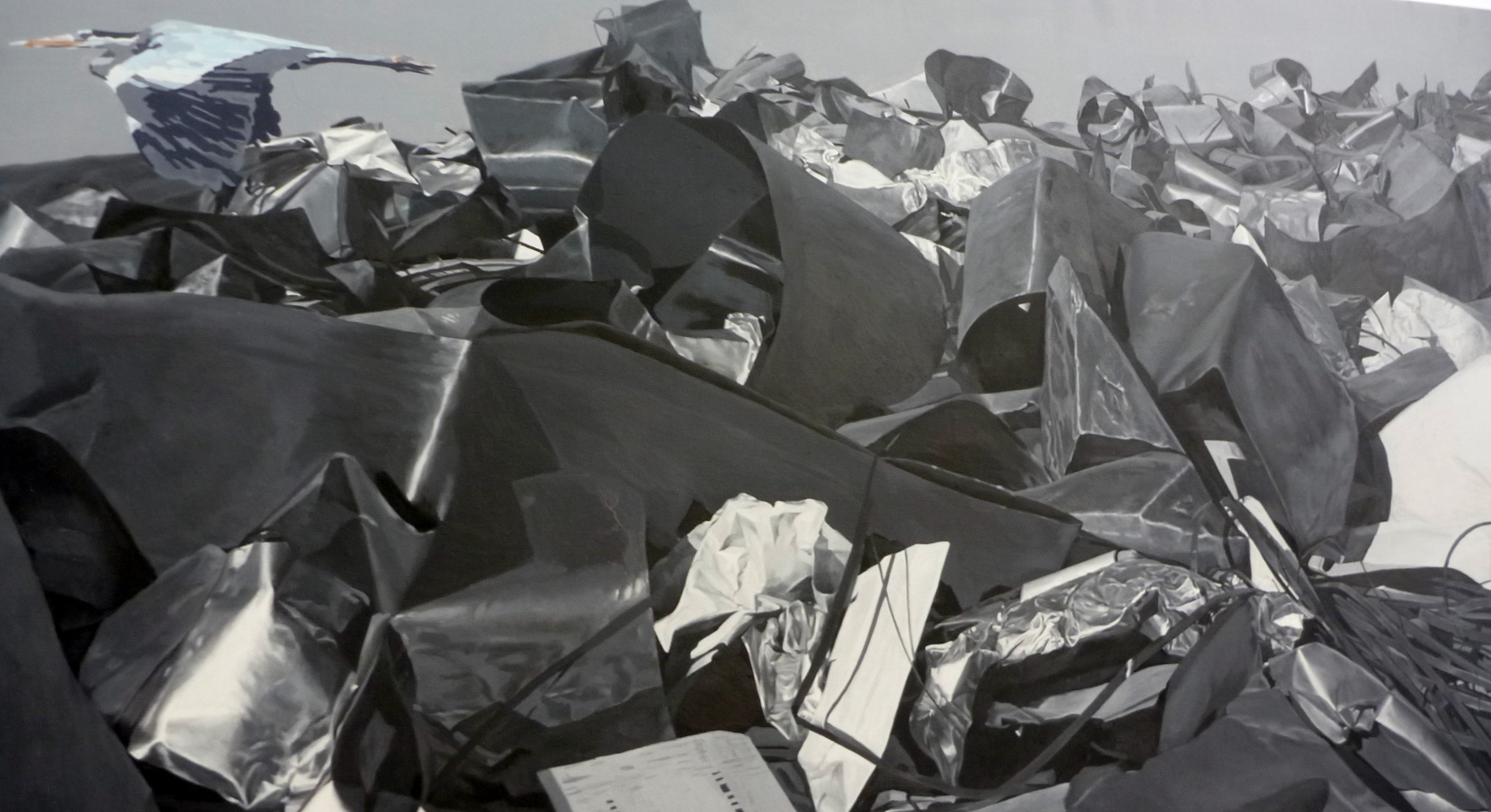 Many Han painters focused on life in the countryside where the Bingtuan apparatus is crumbling; they showed us the power of Xinjiang’s ecosystem by representing the extremes of the cold, wind, ice and desert. But a display by the Kyrgyzstani video artists Muratbek Djumaliev and Gulnara Kasmalieva demonstrated some of the more important changes underway. Their short intersecting videos called “The New Silk Road” shows us the breakdown of Soviet-era trucks as they haul loads of recyclable steel toward the viewer and then are gradually replaced by the arrival of Chinese trucks. They just keep coming and coming and coming and coming. The piece is magnificent and active in the pain of change which is now fully on the Eastern horizon for the Central Asian Republics. 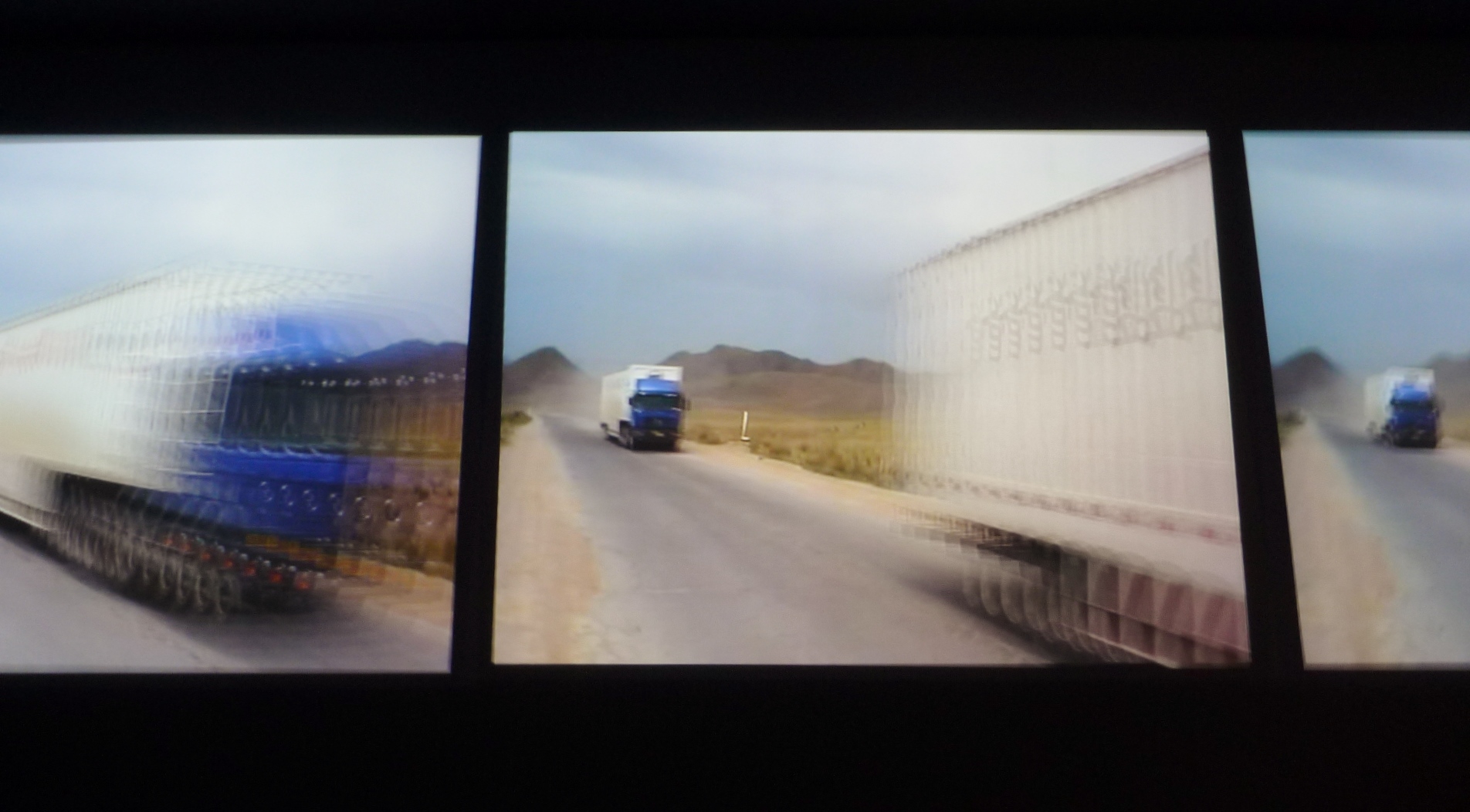 Another painter named Tian Fu depicted vanishing streetlife in Kashgar with a painting called the “Sunshine and I.” The painting, one of the most poignant in the show, is a portrait of a young Uyghur boy, his head freshly shaved in order to ensure that he will have a strong crop of hair, as he plays on a neighborhood street. 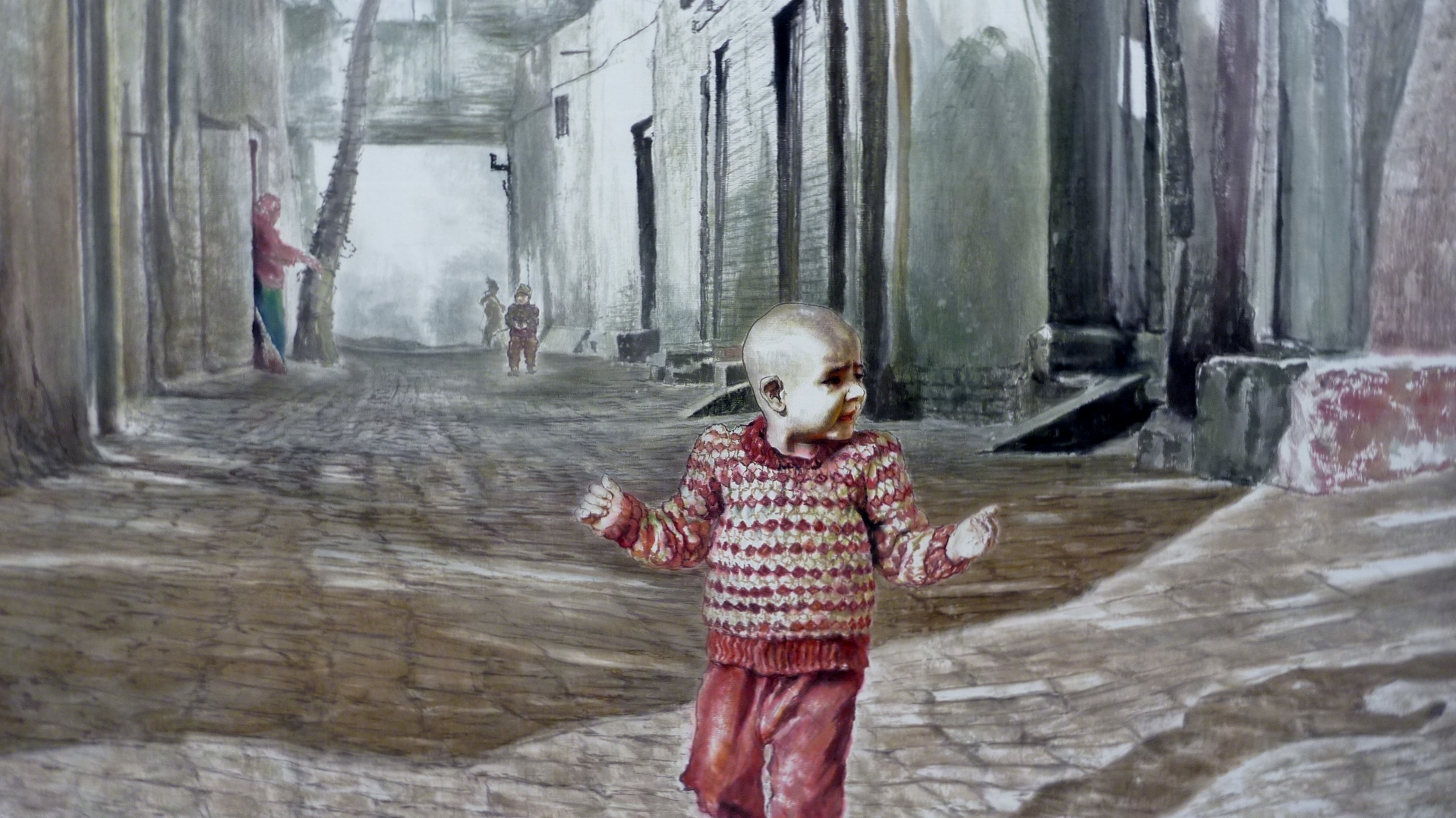 The Sunshine and I | Tian Fu

Many of the paintings on view from a series by young artists selected by the Culture Ministry from Eastern institutions are plainly beautiful. They show us what a Uyghur face looks like when rendered in the style of a European Old Master. Or they show us moments of life, where a turn of the head, the settling dusk on a herd of sheep becomes something more. The Biennale shows us flashes of life itself. 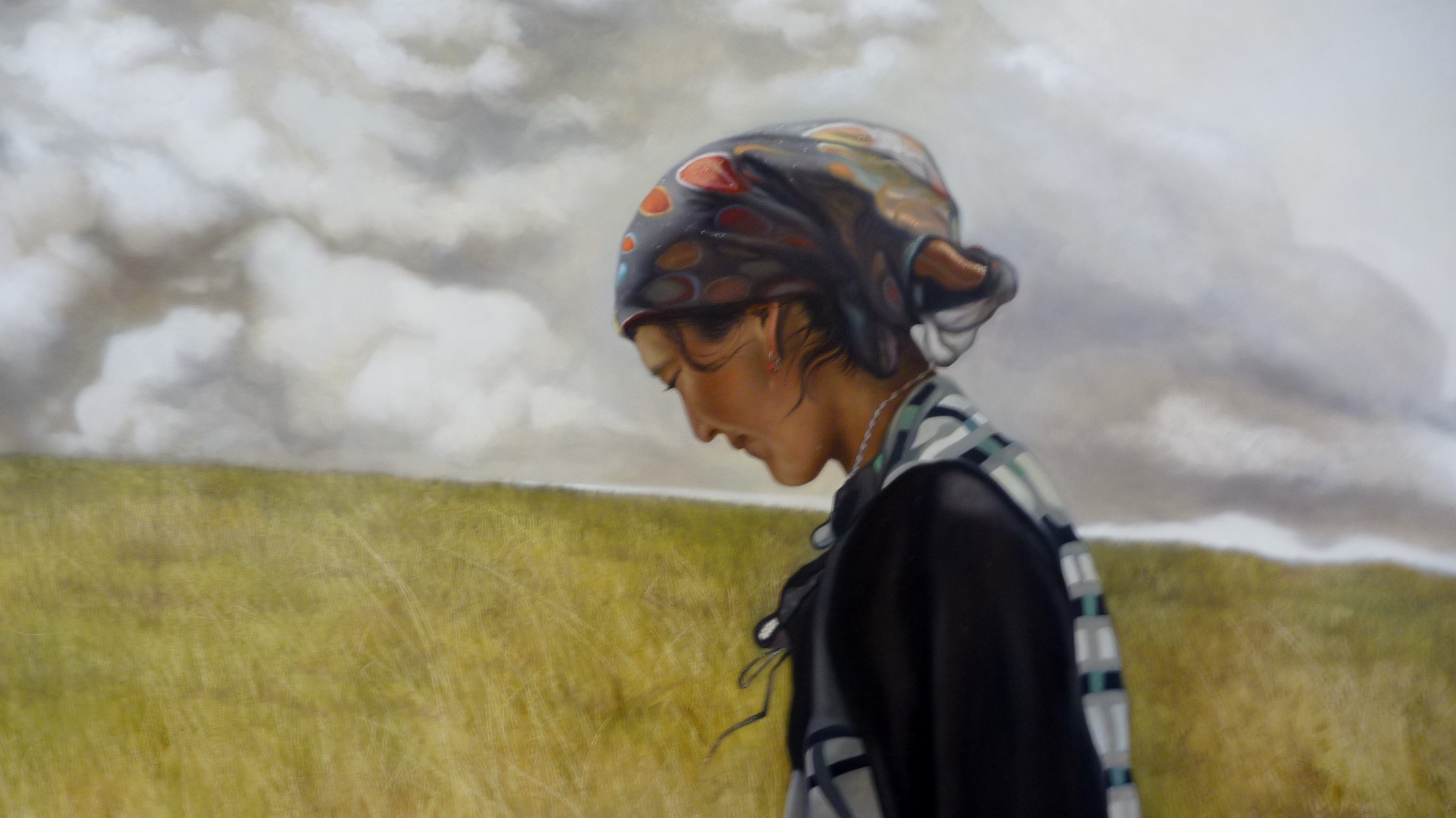 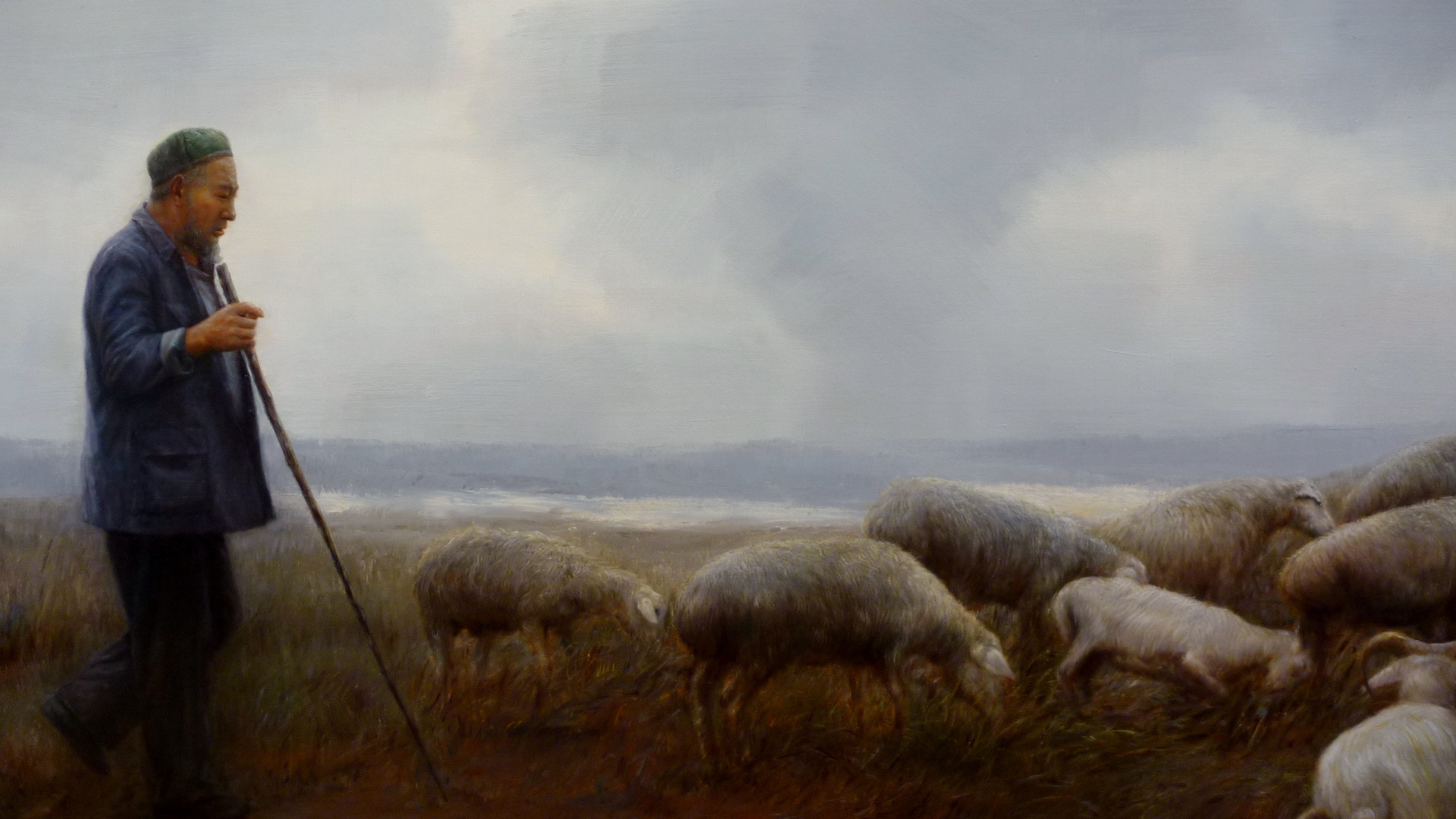