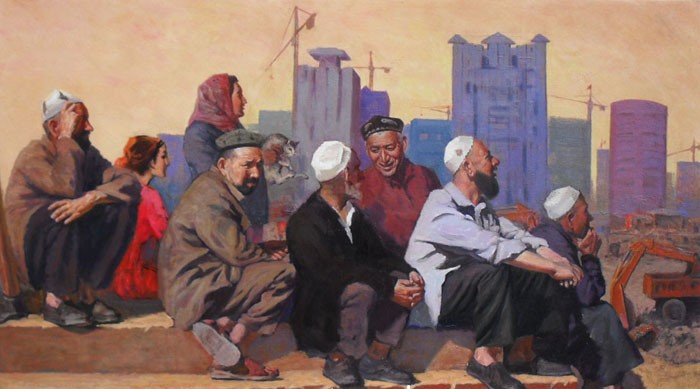 In the wake of the horrific violence in Kunming, Uyghurs around the country have taken to Chinese-language social media to create distance between themselves and the killing of the innocent. The celebrity of Uyghur-Han ethnic friendship, the Guizhou kebab-seller-turned-philanthropist Alimjan (A-li-mu-jiang), put it best. Echoing the massively popular[1] Indian-American film My Name is Khan, Alimjan said “My name is Jiang and I am not a terrorist.” Many people also expressed empathy with those who experienced personal loss and pain on March 1, by writing on their weixin accounts “We are all Kunming people today.”

In Uyghur-language social media Uyghurs have also condemned the crime as “ruthless and inhumane.” But in writing for Uyghur speaking audiences their responses have also been inflected with more than just outrage; their commentaries are also inflected by feelings of shame, fear and uncertainty.  As one writer identified as “Tikenkush” put it, referring to the attackers, “What were they thinking? They have cast a black shadow on Uyghur people and Islam as a religion.”  Since the attackers have been identified as “Xinjiang terrorists,” many fear the region, the people and their faith will be effected as a whole.

Based on the Uyghur-language social media networks I am a part of, many Uyghurs in Ürümchi are advising their family members to stay away from places known to be have high concentrations of Han migrants such as Hualing International market (the Lowes of Central Asia). Uyghurs around the country are reporting being put on leave or having their job contracts canceled. Many hotels in major cities now refuse to rent rooms to Uyghurs.

One of the most forwarded post-“3.01” Uyghur-language Weibo messages illustrates this clearly. The described the experience of a Uyghur photographer who was in Shenyang on work assignment. In the evening he went to many hotels, but could not find a place to stay. He finally went to a police station and explained his situation. Then after checking his ID multiple times, the police helped him get a hotel room. The next day he went to an internet cafe. An employee of the internet cafe asked him for his ID. When he showed his ID, the employee said “Your ethnic group is not allowed to go online here.” When he asked why. The answer was that it’s an order from “above.”

Another writer on Uyghur discussion forum called Gullug.com typified the apprehensive and self-denigrating attitudes that many Uyghurs are battling with deepening intensity. As the lines between ethnic pride and alienation are drawn in sharper distinction this writer, identified as “David,” illustrates the ambivalence of not having a comfortable position in the nation.

Commenting first on the future prospects of being able to move and work in Chinese society he wrote: “They have inflicted a huge wound which cannot be healed. From now on you (Uyghurs) will face all kinds of discrimination in airports and train stations, you will lose the freedom of speech and movement that you have now.” Then turning to a discussion of quality or cultural capital (suzhi), he said: “Because of this (incident) you (Uyghurs) will be perceived as having less education relative to Tibetans and Mongols . . .” Finally voicing a strongly critical stance toward dominant Uyghur worldviews the writer said: “Uyghurs are simply proud because they have a substantial population in Turkey and they are well known by Turks. They are like Ah Q,[2] they have no idea how statistically insignificant they are. Like the backward nationalities and tribes of the Middle East[3], they will be taught a lesson. This group of bastards has harmed millions of people.”

It is interesting to note that David has to some extent internalized the civilizing discourse of mainstream Chinese society that places rural, frontier, and ethnic people in the lowest position of quality (suzhi).  A long time ago W.E.B. Du Bois referred to the kind of experience David is going through as a kind of “double consciousness.” He said that the feeling of always looking at one’s self through the eyes of the majority while at the same time trying to value one’s minority heritage puts tremendous strain on the self. David sees Uyghurs as inhabiting a position of lack. From his point-of-view they lack suzhi, they lack self-awareness, and now “a group of bastards” has created an even greater gap between them and the rest of the nation.

Many people have not yet internalized this form of self-loathing and alienation. As the piece on China Hush shows us, many Uyghurs are seeking to distinguish “true” Uyghur identity from the actions of the attackers in Kunming. Yet despite this effort to salvage the dignity of ethnic identity, other writers, like David, are telling us that the future of Uyghur ethnic pride does not look hopeful.

[1] At least among Uyghur audiences

[3] A reference to the U.S. instigated wars in Iraq